This is the place for all On-Grid or Grid-Tie wind turbine issues and discussions. Customers meet each other, dealers and installers help out with questions.
Post Reply
3 posts • Page 1 of 1

Sure, that system comes with everything but the batteries, a cabinet or closet, and the wiring. A first class job installing will cost you probably $1500 to $2000 I would guess is a good average. That gets the infrastructure and system going. many do it for WAY LESS by doing most of the work themselves. So, can be just a few hundred bucks, depends on how simple or elegant you go with it.

That starter kit will not power your whole residence though. Depends on your wind solar resources and site conditions, but most would say about 200 to 250 kwH a month. You'll have to get more power, like a two or three turbine system with solar to do a whole house system. A whole house grid tie is about $15,000. But, that's the most advanced wind/solar hybrid system there is. That is over 2800 watts with the newer panel upgrades we have been bundling. Wind and solar together, very consistant and way better than just a wind system or just a solar system. So, even if you get a single turbine, off-grid, definitely go ahead and get the wind/solar hybrid starter kit.

The cool thing about our systems is though, with even the starter kit is a 2400 watt inverter. That's because we know this system will get upgraded. We designed this modularly, to get started, build a good infrastructure, prove it out, then add to it as budget allows. Our Grid-Tie all come with a 3500 watt inverter, all very heavy duty stuff to build a strong foundation to upgrade upon.

Of course we get people just go ahead and buy a Grid-Tie 3 turbine wind/solar whole house right off the bat. But not all of us have that kind of dough laying around. I'm not a rich guy, I designed these systems for middle class guys like me. A serious heavy duty system that's scaleable and modular, that's what it is in a nutshell.
--
turbineZ
--
turbine@windenergy7.com
.
--
turbineZ
--
Wind Turbine Buyer's Guide

Wow, that's quite an innovation. We had a long post about an outdoor battery cabinet and how to seal it, insulate it, etc. This would be a good addition to that thread. It's a great idea you had and thanks for sharing that.
--

>> at the shop where we are installing the we-7 the roof is less than
>> 10 y.o. built with pre fabed Modified Queen (Multi-Pannel) truss- all
>> 2x4's. Have you ever heard of anyone needing to make modifications
>> to their roof's to accomadate the we-7 system? Or do you recomend
>> that any modifications be made?
>> Thanks, Larry

What I think you are describing is a normal home truss roof that has no structural problems. That is what the system is designed to work with. Unless the structure is somehow compromised, substandard, abnormal, you just lag the system right into the rafters, centered and that's perfect.

At that point this system actually becomes a part of your roof structure and it all becomes steel reinforced in a way. So, it is my opinion that my roof stricture is much stronger with the turbines on it.

Interestingly, the three turbine system that I helped put on a barn roof this weekend DID REQUIRE to be reinforced and modified. I will post some pictures. The rafters were at... I think a 19.5" centers? Then many were WAY OFF square. So, basically three new rafters were scabbed in on each side, for each of three turbines. That was allot of work. But as the center turbine was whizzing up there Sunday, inside, very silent and stable, even on a tin roof with no ceiling or insulation.


As you can see from the next few shots, this customer's barn is a very old structure and the rafters are not at 24 inch centers and are also way out of square. So, his first BIG TASK was to scab on some square rafter underpinning at 24" centers to mount the turbines properly. On a modern home, 24" rafters or trusses are standard, but if you had a very old barn, or sometimes a industrial application, like a large metal building, you may have to look at some modifications to be sure you have proper structure to mount the turbines onto. 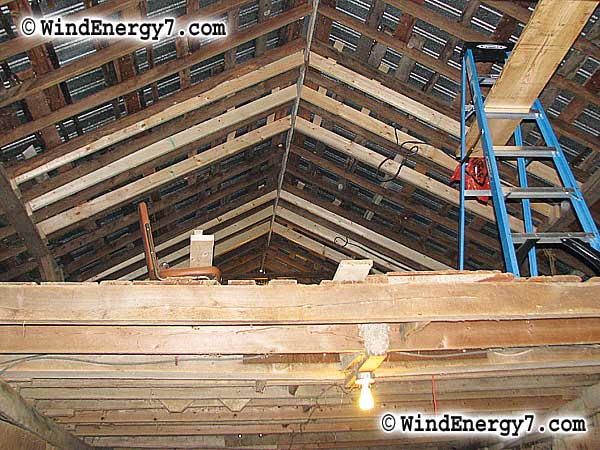 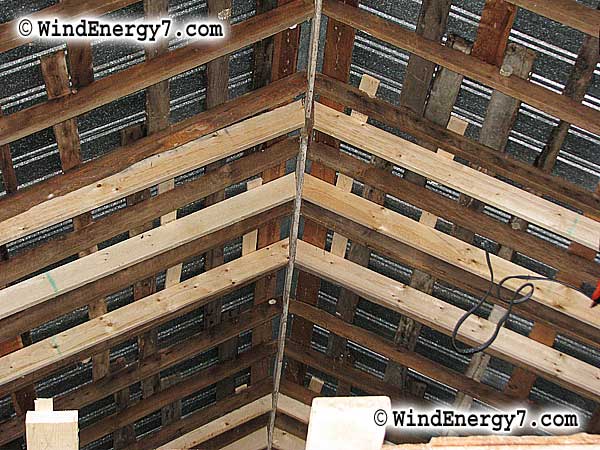