Here's a really neat picture of another recent install in Hawaii. The coastal residence is within view of the ocean from the turbine's rooftop perch. We sweat bullets over the Somoan Tsunami that led to a Tsunami watch in Hawaii and there for a few hours I was worried for the customer and his new system. WindEnergy7 has customers from Hawaii to Massachusetts and north into Canada. I thought of this picture when I heard the news this morning about another expected Tsunami today. Our systems succeed anywhere they get deployed.

This really interesting photo was captured from an iPhone and the way it captured the motion of the blades was really neat. Instead of appearing as straight and streaking like all other photos we have, the iPhone caught them maybe imaged from outside to the center or something. Can't explain this effect and how it worked out. Showed many photographers who thought it was doctored and don't know of a way to capture an image like that on purpose... 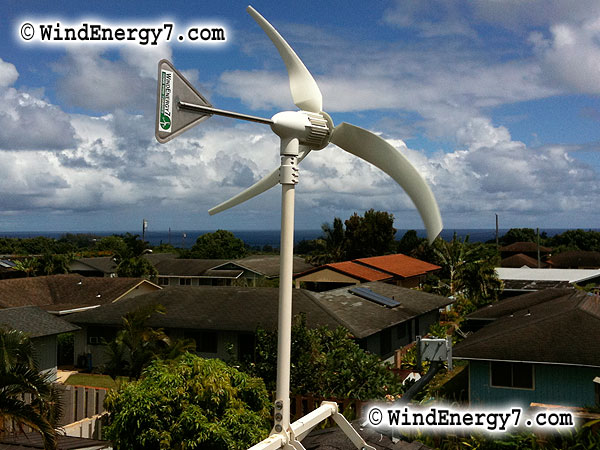 We have many new customers coming from Hawaii because of the excellent performance of our wind/solar hybrid there. The tradewinds spin the system round the clock and the solar kicks strong all day. With a local utilty cost as high as Hawaii, reported as HIGH AS $.55, these systems have about a 2 year ROI which is a payback that makes anyone in the mainland jealous.

Anyone wanting a small wind turbine, fill out the contact form and I can connect you with the dealer for your area. There are still areas open for new dealers but county territories and entire states are being established now, a few states completely established. So, if you are interested in becoming a dealer fill out the same form and we can see if your area may still be open and available.

If you just want to look at the wind/solar hybrid kits we have for home energy or to buy one online Buy Home Wind/Solar Here
.
--
turbineZ
--
Wind Turbine Buyer's Guide